Home CATALONIA AT THE CROSSROADS 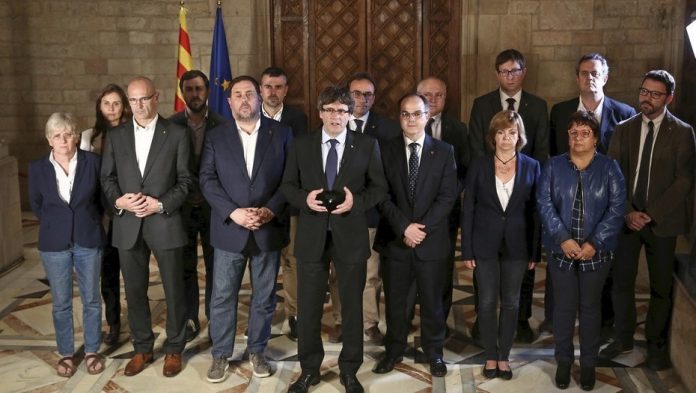 1 October 2017 marked an important commitment of the Catalans with the ballot box. A self-determination referendum on that date questioned the Catalans on their decision about the future of the nation: either stay in Spain, or create a new state. Following a process towards sovereignty, the moment had arrived for the Catalan people to decide.

All the surveys conducted during the last months in Catalonia agree on one point: 75% of Catalans believe that the clash between Catalonia and Spain should be worked out by means of a referendum, in a civilized manner. Unfortunately, the Spanish government, followed by most Spanish political parties, has not lived up to a like democratic approach, resorting instead to a mobilization of all the state’s judiciary and military resources, including an intervention of 10,000 police sent over to Catalonia.

With the referendum outlawed, the Spanish police intervened violently aiming at stopping the vote in many polling stations. The crackdown images spreading worldwide unveiled the Spanish government’s ugly and violent side. The police’s abusive intervention during the referendum day resulted in a toll of 900 people injured.

Despite the hurdles, the consultation’s turnout reached a 43%, receiving 2,286,217 ballots. 90.18% of the vote went for the independence option.

In the face of the results, president Puigdemont stated following the vote that the Catalans had won their right to have their own independent state. According to the referendum act passed in September, a yes vote win would pave the grounds for a parliament of Catalonia’s proclamation of independence in a few days span.

On 3 October, a general strike took the streets of Catalonia to protest the police’s use of force and all the obstacles put in the way. An estimate of the organizers pointed to a participation of 80%, finding wide support among most working sectors.

Confronted with an ever closer independence option and a perception of Spain’s unity weaker than ever since 1898, the unionists loaded their heavy armour, including an address by the king of Spain on TV charged with menacing rhetoric and a fierce message of Spain’s defence minister, to mention but a few. The latter did not mince words, stating that “the state holds the monopoly of violence, and also the duty to use it in the defence of freedom” (sic); could have not made it clearer who is the main guarantor of Spain’s unity.

With tension running high, on 10 October president Puigdemont proclaimed Catalonia’s independence in the parliament, moments before suspending it and the birth of the new republic, opening a span of several weeks to allow for negotiations with the Spanish government. Catalan authorities have urged the international community to broker in the face of the Spanish government’s rigid stance. The latter, for its part, has hung onto threats, presently considering a takeover of Catalonia’s autonomy.