Home CATALONIA: CHRONICLE OF A REFERENDUM 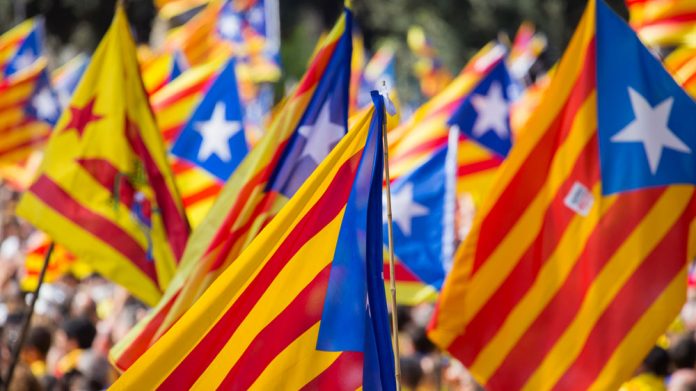 On 1 October 2017, the independence referendum was held in Catalonia. The referendum is a paramount democratic practice and unequivocal proof of political intelligence rarely seen in the world to date. A people living under the sway of the Spanish state, Catalonia, held a vote to determine what its future should be like facing bravely up to threat, proscription, police persecution, as well as the charge of Spanish politicians and media outlets.

Weeks ahead of the vote

In order to hold a vote, Catalonia needs its own legality, so the Parliament of Catalonia passed two acts relying on a majority vote that stirred the protest of the pro-Spanish MPs—the Referendum Act (06/09/2017) eta the Legal Transition Act (08/09/2017), both of them suspended by the Spanish Constitutional Court. During these and following days, the harassing intervention of the Spanish Police and the Civil Guard, a paramilitary body, has not spared any sectors of society and politics.

Some weeks before the vote, the Spanish government sent five thousand National Policemen and Civil Guard over to Catalonia on top of all the police forces stationed by now in the territory, accommodating them in ships, hotels and barracks, and sparking a popular outcry. Next, the Spanish government assigned a Civil Guard colonel with a mandate to ‘coordinate’ all these and Catalonian police forces: Diego de los Cobos. Who is this colonel? Internet delivers some results; he can be seen sporting a signature Falange blue shirt—Falange stands for the party providing the basis for Franco’s dictatorship. Diego de los Cobos is a colonel that on hearing the news of Tejero breaking into the Spanish parliament in the coup attempt of 23 February 1981 presented himself as a volunteer at the Yecla headquarters. In 1992, the Civil Guard officer was reported to tribunals for his involvement in torture subjected to the Basque militant Kepa Urra; a check conducted in the health centre diagnosed heart arrhythmia, four haematomas, neck injuries and several more wounds inflicted to the victim. Despite that, Spanish judges cleared him, with the Spanish government reinstating him in his position thereafter. Despite these moral standards, the Spanish government decided to appoint him as ‘coordinator’ of the police forces in Catalonia. By contrast, the Generalitat rejected in practice such ‘coordination’.

Just days before the referendum, the Spanish National Police and the Civil Guard seized millions of ballots and envelopes; they also shut down printing houses, pro-independence websites and press. They charged against demonstrators, despite their lack of attributions to do so, and they kept searching for ballot boxes. Despite all their efforts, they could not track down the ballot boxes. In addition, the Spanish police forces shut down information centres and occupied facilities of the Catalan’s government, as well as destroying its communication networks and arresting officials and staff working in them. Not only that, the Spanish government took control of the Catalan government’s treasury. Threats to the political class and civil population did not cease, with countless humiliations piling up on the Catalan people. Notwithstanding the circumstances, the referendum was held. The Catalans responded actively, professionals such as farmers, fire fighters, bank staff, students, unionists, health service operators, and so on. However, the referendum did not play out normally, devoid of threats and in a peaceful atmosphere, but it actually happened.

The vote was due on Sunday, so the Spanish judges ordered all schools to be closed once daily school schedule was over on Friday. In order to work around the imposition, many cultural events were scheduled since Friday, day and night, with many people gathering in the activities. On Saturday, 30 October 2017, crowds took to the streets of Catalonia, with people from different social and professional backgrounds turning out in support of the referendum. Just the opposite, a few people got together in a demonstration organized in Barcelona in favour of Spain. This rally assembled people from all over Spain, including people from the pro-Spanish Unión del Pueblo Navarro from Navarre.

Naziogintza witnessed the voting process in a polling station

A Naziogintza member could bear witness first-hand to the voting process of the independence referendum day in a Barcelona polling station, at “Poeta Maragall” Secondary School, set in Provença street, 187.

The day began at six in the morning. The Catalan police Mossos de’Escuadre received strict orders from Spanish judges to evacuate all schools at six in the dawn. However, once the time arrived, hundreds of people waited in front of the schools, with the streets around also crammed and the mossos in turn finding themselves unable to carry out the order without seriously breaking normal social order.

At eight in the morning, 1 October 2017, the referendum organizers identified the representatives from different parties and popular movements, as well as the people called to constitute the polling stations, but no one attended. As provided by the Referendum Act of Catalonia, the first people turning up would be appointed as chairperson and members of the voting tables. The polling stations were constituted at 8.30 am.

Given the adverse circumstances surrounding the vote, the Catalonian government set up the “universal vote system”, by which an Internet database and electronic information centre store the whole census of Catalonia following the May 2017 census. Accordingly, the voters could vote anywhere, and the vote was validated by submission of the ID through the phone. The voting table members noted down the ID numbers of the voters in two lists, and the chairperson of the table validated them by inserting the ID number in a mobile phone. Following submission, the mobile holder received a text back from the relevant information centre that confirmed the validation of the vote.

Due to digital complications, the voting period was subject to important delays. The voting table tracked by the Naziogintza team, opened for vote at 9.30 am, but soon on problems cropped up related to the network, i.e. the Spanish Government persistently blocked the system, but not at a time and/or all polling stations. The chairpersons of the voting tables struggled to progress by setting up new configurations in their phones and trying different passwords. For example, a voting table kicked off at 10.20 am, but the Spanish police blocked the website at 10.30. The voting exercise could kick-start again in short, but 10 minutes later, the system became clogged again.

Meanwhile, bad news were arriving from other polling stations: The people queuing to vote were undergoing police harassment, with reports talking of numerous wounded of all ages and genders. At 12.25 pm, a voting 102 year-old woman was received with applause. Many television journalists turned up at the polling station, with a conspicuous presence of the Flemish Television. The Flemish showed a significant involvement. At the same time, the most notorious television and digital media broadcast the events worldwide. The list of media outlets included names like Reuters, BBC, News AP, Times, New York Times, The Guardian, Flemish Television, The Washington Post, BILD, UKA Labour, agencies belonging to the parties CDU and CSU, and twenty more. At 13:00, The Spanish National Police turned up next to the polling station; however, given the big amount of people assembled and the impossibility to disperse the crowd, they left after a ten-minute standoff. All day long, the polling stations were gripped by fear and emotion, with the police presence adding greatly to them. Once the police was gone, the organizers distributed refreshments, coffee and so on among the people. Solidarity gestures abounded, and the polling station staff and voters showed good atmosphere and collusion.

At 13.18 pm, most voting tables had Internet connection, but three minutes later the system was down again. They decided in turn to note down the list of participating voters by handwriting in two sheets containing each ID number, and do the digital validation progressively as it became possible. The complication resulted in crowds of people waiting to vote, followed thereafter by a normal voting process.

At 2.40 pm, news spread of the Catalan Football Federation cancelling all scheduled football games for the day. In addition, the Barcelona Football Club announced it would play the game closed-doors in order to avoid riots. At 4 pm, as overheard to the Spanish police, news arrived of a projected police raid at 5 pm. Meanwhile, the Generalitat’s Health Service provided the count of injured victims so far, reporting on 465 wounded in all Catalonia, two of them in critical condition. Tension was running high, but nothing happened. Soon on another dispatch arrived, seized also to the police, stating that the police raid would take place at 6 pm. At 6.40 pm, news went again that a police attack could be expected in no time. Given the 500-plus figure of casualties all over Catalonia, it was recommended was to desist resistance if police arrived, cancel everything, and leave the place peacefully. However, no such attack took place, and afternoon-evening wore on normally for the vote, sometimes giving even the possibility to validate the votes. At 7.30 pm, the network system operated almost normally again.

The last three minutes in the voting day, became a shuddering clamour. Crowds cramming the streets still cried “we will vote” persistently, with the people opening corridors to allow last-minute voters to arrive on due time to the polling stations. Behind the door panes of the secondary school, people look out onto the street, while the people outside looked back inside in solidarity. Hundreds of people started to count out the last ten seconds down until zero, when they all burst out in roaring ovation. Then, the people in the street came back to cry “we will vote” calmly and cheerfully that turned into a feeling of success.

At 8.20 pm, according to the data provided by the Health Counsellor of the Generalitat, the crackdown carried out by the Spanish security forces resulted in 844 people injured. Late on the day, the Health Service of Catalonia dispatched a briefing reporting on 894 injured people as a result of the force used by the police during the referendum day.

The referendum was a clean democratic exercise, a victory of the Catalan people. Despite the harsh crackdown enforced, the people managed to convey their resolution. Catalonia achieved its political and emotional disconnection from Spain. It will be no easy task for the Spanish government to restore its communication and relationship with Catalonia. At any rate, from now on Spain has no option but come to terms with a new relation basis built on equality, instead of a metropolis-to-possession relation, as it has operated so far.

Testifying to the referendum day was moving, an account of the events can hardly express the emotions shared, it is a unique, live experience; young and adults, women and men, conservatives and progressives, the casual dressed and the tie-and-suit, all exuded optimism because they could vote. It was touching to see people crying with emotion all day long, often bursting out in tears, people hugging each other, feeling the collusion between polling station staff and voters, in their rage, words, smiles, lit-up faces, and fears. I could constantly hear many adults expressing it was their happiest day ever. The 1 October 2017 will no doubt remain recorded in the historic memory of the Catalan people for the organizational skills deployed, their mobilization ability and strength in the streets, the resilience of their government, the cooperation between government and people, and their stealthy collusion, as attested in the concealment of the ballot boxes. Naziogintza Taldea could testify to and live the camaraderie sentiment outpoured in Barcelona. The Catalans are not emotionally connected with Spain anymore since 1 October 2017.