Home Press archive THE OPRESSED IS ALWAYS THE DISCRIMINATOR 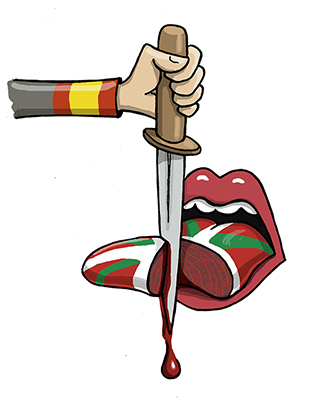 A Spanish court has recently dismanteled the Plan For The Normalization Of the Basque Language of the Council Of Gipuzkoa. This is what we are reminded by the author of the article. The reason behind it? This plan is “discriminatory” against Spanish speakers.

For centuries the Basque language has been forbidden in our schools, with Basques being looked down on and publically humiliated. Under Franco’s dictatorship, linguistic opression was merciless. And under the Spanish “democracy”, among other things, our national newspaper in Basque (Euskaldunon Egunkaria) was closed by force of arms in 2002 by the Spaniards. With these precedents, you have to be absolutely shameless to say we Basque speakers “discriminate” Spanish speakers.

Among the arguments used to abrogate the plan, it is mentioned that Basque is the prioritized language on the website of the Council of Gipuzkoa (www.gipuzkoa.eus) (despite the website being also available in Spanish and English). According to the judges, this action is “discriminatory” against Spanish speakers (??).Another one, in the services outsourced by the Council of Gipuzkoa, the Council may not set any linguistic criteria (i.e. require any Basque language skills for a lot of jobs). That is also “discriminatory” against Spanish speakers.

And yet another one: The Council of Gipuzkoa may not hold any press conferences through Basque alone, for the same reasons (it is also invalid to provide journalist all of the information in Spanish alone, apparently).

The list of prohibitions from the judges is a long and humiliating one: in advertising, writing more in Basque than in Spanish will not be allowed. The organizations receiving public funding may not be required to save some room for the Basque language in their documents, and so on.

Charles III of Spain issued the following order in 1770: “Let it be accomplished at once that the diverse languages used throughout the kingdom be extinguished and Spanish be left as the only language spoken.” In 2017 the Spanish judges have toed the line at this order.