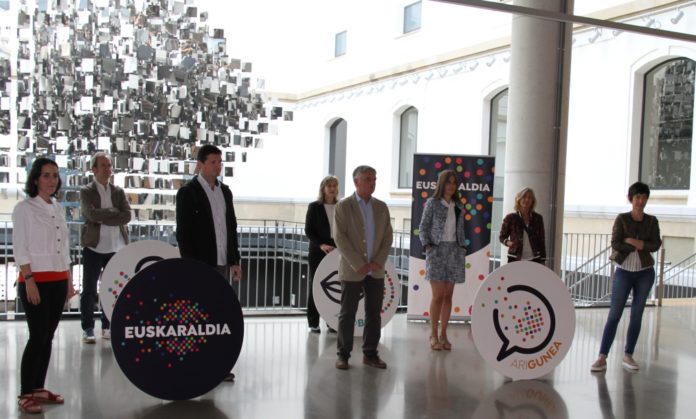 Note for our non-Basque readers: Euskaraldia is an initiative in support of the Basque language, taking place biannually and lasting a fortnight. The objective of the initiative, which takes place throughout the Basque Country, is to promote the use of the Basque language: in those two weeks, everyone and all companies, associations, clubs, etc. are invited to speak and communicate only in Basque . Those who speak the Basque language take part in the initiative, as well as those who do not speak it well but understand it. For more information, see our article on the first edition of Euskaraldia (https://www.naziogintza.eus/en/nazio-bidelagunak/euskaraldia-living-in-basque-for-11-days/)

This year’s edition of Euskaraldia will be different as everything is different because of the damn coronavirus, and even more so in the case of a communication exercise between the “belarriprest” (people who understand Basque but do not speak it) and the “ahobizi” (people who speak Basque well). We wish this fifteen-day language initiative well, and we offer its organizers, promoters and participants our solidarity.

That said, let’s analyze the possible collateral damage of this initiative. Without further ado, let us anticipate the main collateral damage that we fear: that our politicians will transfer the responsibility of re-euskaldunizing (extending the use of the Basque language by ) our People, so much under foreign pressure, to the Basque citizenry.

We are all aware of the great gaps in the normalization of the Basque language; for example, in the services offered by the Spanish state in the Western Basque Country (or Basque Autonomous Community): in the Post Office, in the Renfe (railway network), in the Spanish police offices, etc., almost always ” Good morning ”, in Spanish. However, the regional Government can do much more in the devolved services and those that it controls.

For example, in the field of Justice, Osakidetza (Basque Health Service), Ertzaintza (Basque police) … and also in something as important for the normalization of our language as EITB (Basque public radio-television), where a person who does not speak well the Basque language has just been appointed Director. Why do things happen here that would be totally unthinkable and inadmissible in France or Spain? For us, let’s be clear, without Euskera and without Basque culture, the Western Basque Country would be a territory without a national identity, such as La Rioja or Cantabria (two Spanish regions). It seems that the regional administration does not see the issue in the same way.

There are wrong attitudes and one of them is this thought: we all know Spanish. It is not taken into account that there are many of us who prefer to speak in Basque, and that we are more used to speaking in Basque because that is our usual language.

How much is Basque used in the Basque Parliament, in the provincial councils, in the town halls, and how much more can our politicians do by setting an example? It is easier, of course, to pretend for two weeks, and perhaps also to use the language a little more, in the best of cases, before going back to business as usual.

If the “Euskaraldia” works as an excuse not to develop more ambitious language policies and so that our politicians do not better fulfill their responsibilities with our language, then that will be serious collateral damage. If on the contrary it works as a way of encouraging or stimulating our politicians, as has happened with the political process in Catalonia, then it will become the most effective dynamic that we have had in recent times in favor of the Basque language.

Regardless of the success and effectiveness of Euskaraldia, the survival of the language requires a new regulatory framework that would apply progressive developments and take into account sociolinguistic differences, yes, but also improve the outdated language normalization law of 1982, and always with the political class giving example, without leaving almost everything to simple voluntarism.